Our Tribute To The Old School

Our Tribute To The Old School 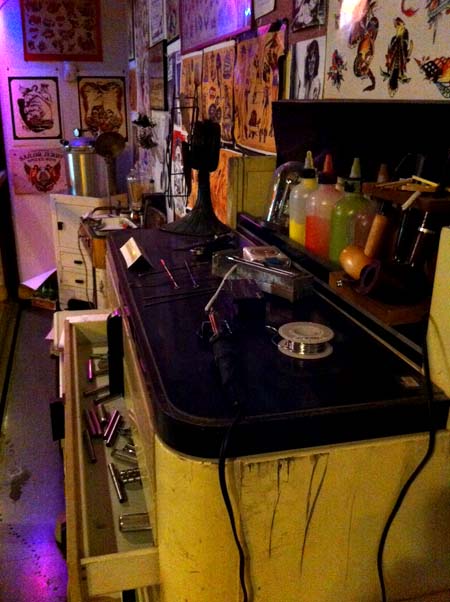 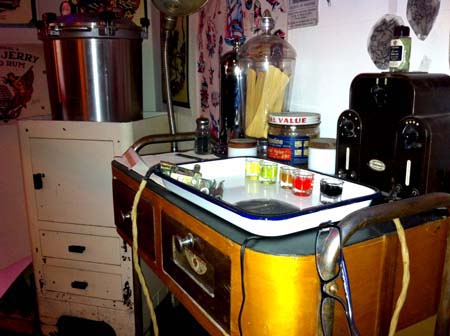 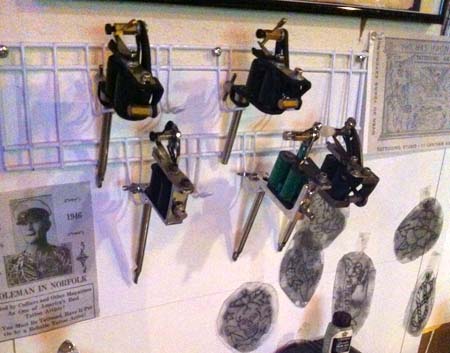 When you sit around the old timers and listen to them talk about the old days of tattooing, they give vivid descriptions of typical sponge and bucket shops located on busy, seedy avenues populated by sailors, prostitutes, drunks, and bums. Throngs of young men wearing white “dixie cup” hats and dungarees on liberty packed shops on paydays, and the drunks formed endless lines through the door. The tattooers worked with handmade equipment: hand cut stencils; tubes made from car antennas; needle bars made from bicycle spokes; a bucket for the water and sponge; and, a set of twelve needles to last the year. Only flash hung on the walls, and perhaps a sign saying “No Minors” or “Pay in Advance.” There was no sanitation. It was Spartan and gritty.

Sailor Jerry had a small, but modern tattoo shop at 150 N. Hotel Street in Honolulu, Hawaii. It was modern in that it was a sterile shop with individual servings of ink for each customer, and nothing was reused unless it was sterilized. Tattoo tubes and needles may have been used several times, but they were washed, scrubbed, packaged, and autoclaved. Sailor Jerry wrote,

Today, all across the United States, most of the remaining shops that are in operation work clean, using sterile gauze sponges rather than toilet paper or a rag for wiping off the surplus ink and color, autoclaved sterile dressings in place of the old paper napkins, and they change the tube and needle on the machine after every job instead of just rinsing it out in a bucket of water.

This was a necessary departure from tattoo practices that spread communicable diseases, caused infections, and cross contamination. Tattoo shops not adhering to these practices were eventually shut down by health inspectors.

The display of the old shop front at Studio 21 Tattoo can be viewed from the parking lot. Phil Luck, who tattoos at Studio 21, set up this display to look like Sailor Jerry’s shop on Hotel Street. Although this is not Sailor Jerry’s  original equipment, these are some of the items tattooers operating a sterile shop would have used. There is a sterilization desk with separate drawers for dirty and clean tubes. There is not an autoclave in this display, but there is a pressure pot to sterilize tubes and needles. Also, there are a few pipes for a hand free smoke while tattooing.

On the walls of this display are several examples of pre-war flash, and flash from the 1940’s. These were bold tattoo designs with a few colors that would take minutes for Sailor Jerry, or any tattooer operating at the time, to tattoo on hundreds of customers a month. In the corner of the display is an antique business cards from Brooklyn Blackie in Coney Island, Joe and Mable Darpel from Texas, Mildred form the Bowery of New York, to name a few. Crazy Philadelphia Eddie estimates that there were three hundred tattooers around the globe at that time. If his estimations are correct, these ten cards represent roughly three percent of all the tattooers in the world at that time!

If you are ever in Las Vegas, or if you live in the area, come by Studio 21 Tattoo to check out the display. It is visible twenty-four hours a day. Although we have progressed with the times at this tattoo shop, our cleanliness and sterilization practices were developed from the same practices as the tattoo pioneers and their modern shops. We hope our display gives you an idea about the state of the art in tattooing at that time. As the old saying goes, “we are as ancient as yesterday, and as modern as tomorrow.”