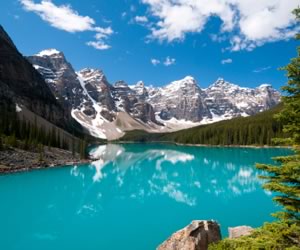 Here at the studio, we have the opportunity to meet and tattoo folks from all over the world every day. Guess that’s one of the advantages of tattooing in Las Vegas. We have a tremendous clientele from Alberta. Mostly from Calgary and Edmonton, but many from British Columbia, primarily Vancouver. It seems Canadians like getting their commemorative tattoos for their holidays in Las Vegas. Most of them return every year for one or two sessions, sometimes more.

The attitude of Canadian people who get tattooed is what always stands out to me. These guys really know how to have a good time. It’s a very rare occasion when we meet an unfriendly or rude Canadian. Always smiling and having a great time telling stories of home.

When the recession hit Las Vegas back in 2008, the Canadian tattoo enthusiasts along with the European clientele were the ones who kept us afloat through the tough times. When locals here in Vegas couldn’t fit the tattoos in their budgets, the Canadians just kept coming.

I do a tattoo convention in Calgary, Alberta every October. It’s called Alberta Bound tattoo and Arts Festival. It’s put together by a very nice guy named Steve Peace. He owns Immaculate Concept Tattoo up there in Calgary. You couldn’t find a nicer guy to work with. He’s got the best tattoo convention going right now. It’s always buzzing with activity from beginning to end. Steve provides great entertainment at a really nice venue. The convention is always held at the Calgary Stampede Grounds which is a perfect spot in downtown Calgary. Looking forward to making the trip real soon! Love tattooing Canadians!

I always take a couple extra days to go sight seeing when the convention is done. It’s always great to drive west out of Calgary toward the Rockies! The scenery can’t be beat.The traffic is not bad. Occasionally, you’ll run across a tour bus full of Japanese people who don’t know how to behave in public, but, what the hell, they’re just trying to snap as many photos as possible with their iPads and yell at the top of their lungs in the most pristine, quiet places. That brings me to Lake Louise. this is possibly one of the most beautiful spots I’ve ever seen. Amazing!